The Jewel of Assam : Mekhela Chador 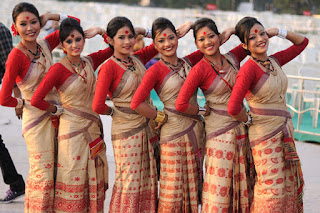 Assam, since ancient times, was renowned for producing high quality silk. The well-known Muga Silk, which is a variety of wild silk is geographically labelled to the state of Assam in India.
In a state where beauty lurks in every corner, from it’s jade green tea gardens to being a home to the great Indian one horned Rhinoceros, Assam has captured the hearts of many and more. Furthermore, it is also popular for its traditional  dress style, Mekhela Chador, otherwise known as Mekhela Sador. 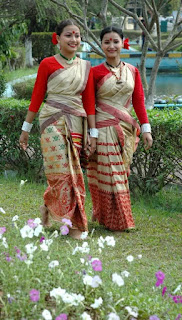 The acclaimed Mekhela Chador  is an absolute jewel of Assamese as it’s pattern consists of ornamental designs that are traditionally woven, but never printed. Occasionally, a woven pattern called Pari is on the side of the chador to make the dress look more appealing while still being in its natural state.
The Mekhela Chador has a very unique and extraordinary style of draping. There are two main pieces of cloth that are draped around the body. The bottom half of this Assamese dress is called the ‘Mekhela’ which is worn over a petticoat, while the top of the dress known as ‘Chador’ is a lengthy piece of material that is plaited and tugged into the upper portion of the Mekhela. A fitted blouse over the Mekhela Chador completes the attire of an Assamese drape/dress.

The magnificent and unique saree, which was formerly only worn by women in Assam, had travelled a long journey to define it’s beauty and worth in the Bollywood industry and modern lifestyle. Actresses like Preity Zinta, Bipasha Basu, Karishma Kapoor and many more, have made their appearance wearing this traditional drape, and had managed to ground the style of this Assamese jewel all over India. Lakme, the fashion brand, had also introduced the Mekhela Chador in their Lakme Fashion Week and ever since then, Mekhela Chador’s journey has been unstoppable.