Skip to content
Cart
We Ship Internationally FedEx & DHL services
OnlyPaithani is on WhatsApp message us now on 983 376 7750
Sarees have been a part of Indias culture for ages and no matter how modern the Indian woman has gotten, there is rarely one who would not be bewitched by this splendid length of garment. Saree references have been found during the Indus Valley Civilization and has also been mentioned in the Rig-veda, which is dated to be written in 3000 BC.


From daily wear to wedding trousseau, sarees have been an essential piece of clothing for the Indian woman. And even though more convenient forms of daily wear have taken over, the allure of this beautiful handloom art cannot be ignored. The paithani has been beautifully described as a poem made in silk and gold, and aptly so.

The tradition of handlooms of Maharashtra is centuries old and have seen some really glorious days in the past. Of the various styles of handlooms sarees that have been popular, very few remain to this day, and are almost fighting for survival. The advancement of machinery and powerlooms have surely affected the beautiful art of handloom weaves. 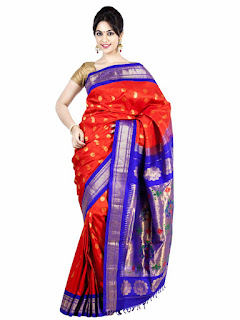 Paithani sarees, since ages had been known as precious garments, handwoven in silk and gold, for those with discerning and refined tastes and has been coveted in Maharashtra as a precious heirloom which is passed down from one generation to the next. Legend has it that in olden times the Paithani was traded in return for gold and precious stones. This truly royal fabric is still woven in the traditional ways and is renowned as the “Mahavastra” – the great, royal fabric, fit to be worn at weddings and special occasions. No wonder its been one of the most important piece in any girls wedding trousseau. 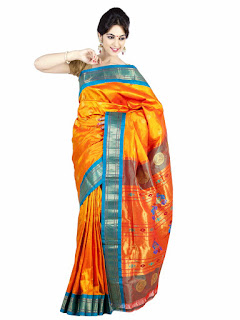 Of all the handlooms being woven in Maharashtra, Paithani remains the most well known for its intricate weaves and richness. The art of Paithani weaving is almost 2000 year old and have evolved over this period. Flourishing in the town of Paithan, from where the name also originates, the motifs and designs on Paithanis have been heavily inspired by paitnings and sculptures found in the Ajanta and Ellora caves. The earliest of the Paithani sarees were woven in the best quality cotton and then progressed to be woven in silk. The easiest way to identify a real paithani weave is to check the reverse of the weave which should exactly replicate the front design and should be void of any loose threads. That being said, a lot of jacquard work is now also incorporated to create more colourful patterns in the Paithani. 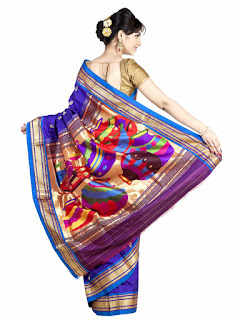 The Paithani saw many changes as various dynasties and kings rules Maharastra over the period but flourished the most as the Maratha empire took over. The Peshwa Daftar and other contemporary Maratha records are full of references to the Paithani, its golden brocade in particular and Paithani weaves on clothings like Rumal, Shela, Dupatta, Tivate, Batti, Dhoti, Khann, etc, show that the art was not limited to sarees in particular, and was a highly preferred garment by the royal men as well. Many references of orders for various Paithani garments have been found to be placed during the Maratha empire, and especially during Nanasaheb Peshwa’s period. 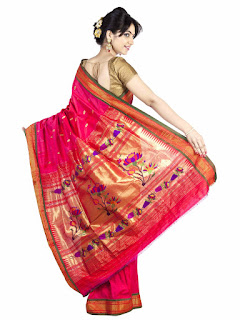 Even though now peacocks have become synonymous with the Paithani, so much so that a lot of ladies believe if there are no peacocks then its not a paithani, the Ajanta lotus motif was the most used on ancient paithanis. As time progressed, peacock being the beautiful bird that it is, became the most popular of the designs woven on a paithani. Floral designs have also been very popular, especially during the Peshwa times, but are also expensive to weave. While the peacock (mor), parrot (tota-maina/muniya) are well-known, some of the other designs are the Bangdi-mor (peacocks in a bangle), lotus (kamal/ajanta kamal), Asawali (vine/vel), swan (hans). The most typical lattice style woven border is known as the narali border.  Small buttas woven on a paithani also are in different shapes like paisley (kairi/kuyiri), flower, coin, star etc. 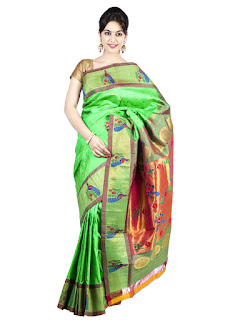 This art of weaving Paithanis was limited to Paithan city till almost the 17th century. Raghujibaba Patil, the founder of Yeola city, took along with him some families from among the expert weavers in the late 17th century from Paithan to Yeola. Besides paying them very handsome salaries, he provided them with all civic facilities. The weavers were sincere enough and devoted enough time and effort to their art and so were successful in making Yeola too a known name in textile markets. After that, Yeola Paithanis were popular next only to the Paithani Brocades of Paithan. 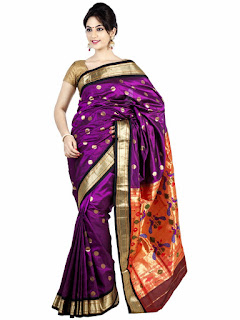 Another big reason for the decline of Paithani manufacturing in Paithan was the deadly attacks on the Paithan city in the late 17th century by the Pindharis. The textile industry fell prey to these brutal attacks and weavers took refuge to Yeola and other towns.

The paithanis, which were woven in gold and silver in during the times of Peshwas, were seen as a fabric fit for royalty and hence unaffordable for the commons. As times progressed and weaving techniques changed, the gold and silver zari was replaced by regular plated zari for economical reasons. The paithani though has not lost its lustre and still is as desired by every girl and woman in Maharashtra  and is also known as the “Mahavastra” – the great fabric for its royal heritage and the intricacy with which its woven. We hope this love for paithanis remain in centuries to come and we are able to carry on this tradition for many more generations.