Skip to content
Free shippingOn all orders over Rs. 50000
PAY ONLY Rs. 1000 FOR INTERNATIONAL SHIPPINGon orders over Rs. 23000
OnlyPaithani is on WhatsAppReach us on 9833767750
Banarasi Weaving- A Tale as Old as Time 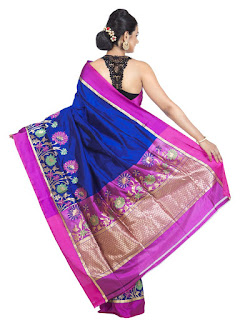 Banaras is one of the oldest cities of India and is well known for religious reasons as well as its exclusive length of silk sarees. The typical sarees which reflect the creative specialty of the weavers in this city are known as “Banarasi sarees”. Over time, the looms and the artistic flare of the weavers have given birth to a wide variety of designs and weaves, using the strands of silk in distinct ways blended with metallic threads or zari and also muslin in some cases. They have been given individual names and have captured millions of hearts all over the world.

Situated in the west bank of the Ganges, the city of Banaras has its own old world charm. The weaving traditions and the tale of silk has been an integral part of its history. However, Banarasi sarees have beautifully adapted to changes in motifs, colours and weave preferences along the flow of time. The history of weaving is deeply embedded in the culture of the city and at the very mention of the name Banaras, silk sarees surely come to mind.

The weaving traditions of Banaras can be traced back to the fourth and the fifth centuries when the handmade textile was preferred with bird, flower and animal motifs by the elite. Later on with evolution of new designs and styles the ‘Butidar’ gained popularity during the thirteenth century. Banaras as a city has seen waves of changes from being a center of Hindu culture to being a seat of Buddhism and also experiencing modifications in the way of life and weaving alterations with the advent of the Mughals followed by the British. Every time the weavers of Banaras adapted to the new flavor flawlessly, with great enthusiasm and expertise. The myriad changes in patterns in fact helped the Banarasi sarees to grow and keep its freshness intact for ages.

The floral motifs reflecting Islamic patterns and the ‘Jaal’ or the Mughal lattice designs gained popularity during the 16th century and within a few hundred years, it was gradually phasing to a fresh style that mirrored close resemblance to geometrical patterns that quintessentially matched the wall papers with an essence of Victorian style.

Designs have surfaced with new combinations and the current trends are a blend reflecting the revival of traditional patterns, beautifully matched with modern hues, preferred motifs and the sense of style.

Different types of Banarasi Sarees:
Since, the existence of typical Banarasi sarees has a long trail, the designs and kinds of the drapes are available in a wide variety. Just a few of them are Katan (Pure silk), Kora (Organza), Jamdani, Brocade, Tanchoi, Jangla, Tissue, Brocade, Cutwork and Butidar. 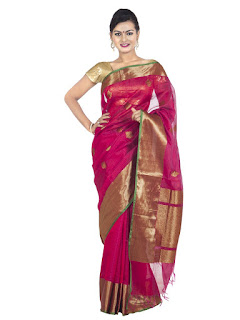 The Katan Banarasi is a length of sheer pleasure, woven from pure silk. It’s a true reflection of artwork from the house of Banarasi weavers and has an unparallel and timeless beauty. They typically come with Indian motifs with pure silk threads woven on a handloom.


Organza:
Organza or Kora is variety of Banarasi saree that looks dazzling with it’s interweave of zari and silk threads. The elegant and rich woven brocade borders of the sarees are uniquely made with different counts of warp and warp counts creating an array of designs. 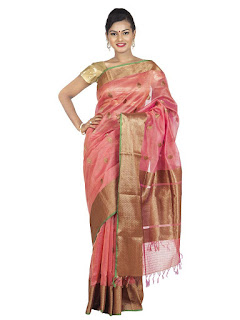 Jamdani:
The silk Jamdani from Banaras is technically a variety of brocade. During the Mughal period, it was exclusively woven for the royalty. In these sarees, the silk threads are generally brocaded with cotton and in very rare cases with zari. The Jamdani, is originally a product that came out of the handlooms of Bangladesh. But the excellent ability of the Banarasi weavers to adopt other designs from different regions helped in quickly gaining expertise in these muslin sarees which were worn by the royalty during the hot summer months. 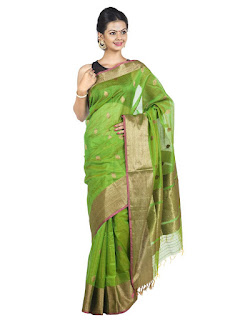 Brocade:
Banarasi brocades were meant for the royalty and that is why it was created with the sheen of gold and silver. Sounds like a dream, doesn’t it? But even history gives its evidence, as the brocades are also mentioned in the Rig Vedic period c. 1750-500 BCE with different names where fabric of gold are described ‘Hiranya Vastra’. Since olden times, Indian brocades have been in popular demand even in countries like Tibet, where the fabric is used for traditional rituals.

A new innovation in Banarasi brocade is called ‘Silkora’ which is a blend of silk and cotton.  Brocades use zari with silk threads to form different patterns and are available in different price ranges depending on the intricacy of work and the threads used. 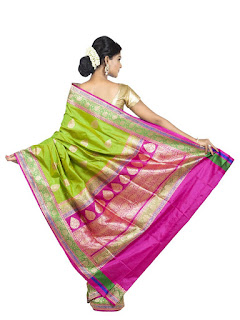 Tanchoi:
Tanchoi sarees are well known for their unique and traditional paisley designs that are generally woven in zari or metal threads. It is a bridal banarasi saree with an intricately designed pallus showcasing lavishness of the weave and conventional motifs. Other patterns that can be spotted on tanchoi sarees are flowers, birds like peacocks and parrots. These are preferred sarees for cooler months and are worn during festivals or weddings. 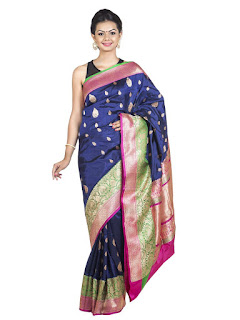 Butidar:
The butidar Banarasi sarees are a variety of brocade designed with small ball like motifs woven with zari and silken threads. The different types of motifs or ‘Butis’ as they are traditionally called, include patti (leaf)  buttis, Angoor Bail (grape vine), Jhummar Butti, Bauchar butti, Jhari butti and Latiffa Butti among several others. They have a wonderful appeal with a light and shade effect and are popular choice for special events.


The Banarasi sarees have an endless tale to tell since the traditional cottage industry handicraft has seen change of taste, weaves and motifs through ages with the weavers adapting designs from other regions of the county too including Bengal and Gujarat. However, the handloom industry is facing a slow death and being replaced by the power looms. The higher weaving cost and the cheaper imitation of Banarasi silks is pushing this work of art towards extinction. It’s every Indian woman’s dream to equip their wardrobe with at least few kinds of Banarasi, and choosing the handloom versions will permit the age old textile craft to survive the test of times.
Share Share on Facebook Tweet Tweet on Twitter Pin it Pin on Pinterest
Back to Banarasi Weaving - A Tale as Old as Time
Example blog post
Example blog post
Example blog post